How to Use OAuth to Integrate with Public Cloud Services

Popular cloud service providers such as Google, Salesforce.com and Workplay support REST and OAuth standards to enable enteprise application to consume their services. REST for application integration and OAuth for authentication and authorization. Rather than being mired in supporting multiple enterprise identities for granting and tracking access to their cloud resources, cloud providers use OAuth to provide a single vector of access control to their services. This integration scheme often works great for brand new consumer internet applications that don’t have go down the path of retrofitting REST and OAuth standards into their framework. Enterprise applications, unlike their counterparts in the consumer internet space have to retrofit. Enterprise applications that are cloud enabled still have to access local services using enterprise-based identity standards and cloud services using OAuth. Adding additional access control standards within an application becomes a welding job and adds friction to a successful deployment. This issue is further revealed in illustration below.

OAuth without an API Gateway 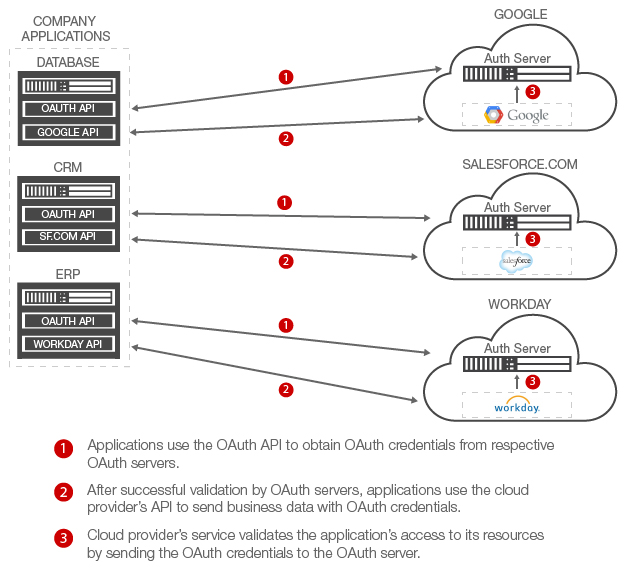 The figure above illustrates the architecture of a company that integrates its enterprise applications with three public cloud services.

Although, a cloud-based integration provides tremendous benefits strategically, there are several challenges that a company faces with this architecture as it embraces cloud services as the new backbone for its applications:

OAuth with an API Gateway 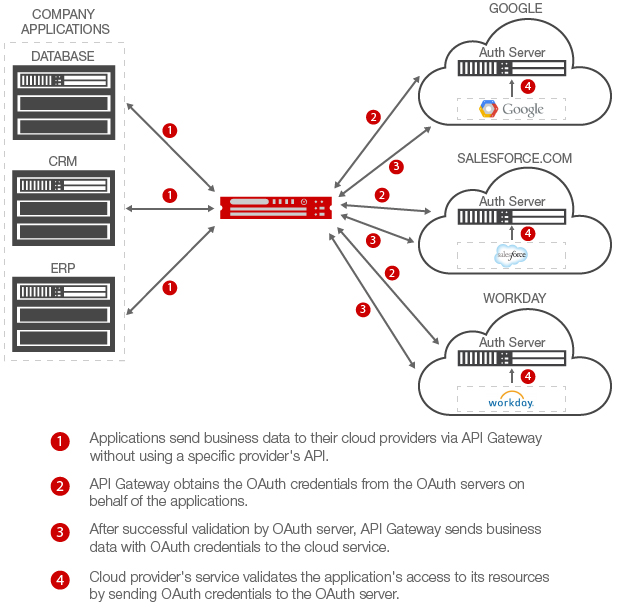 The figure above illustrates an architecture deployment with an API Gateway.

When an API gateway is added to the architecture deployment, it addresses many of the challenges we discussed in the previous scenario:

Using an API Gateway as part of your cloud strategy becomes a minimally invasive IT operation. An API Gateway should be a key fabric of a company’s cloud strategy. If correctly leveraged, it will enable cloud services to be one of the primary backbones of an enterprise’s application architecture.

As you can see in the two illustrations, completing the OAuth process is a lot less work for an organization with an API gateway. The gateway does most of the heavy lifting for you. In these figures, we show three applications interacting with three cloud providers. Typically, this is just a starting point for enterprise customers who eventually expand to many internal applications integrated with many cloud providers.

What other services does your organization use OAuth to integrate with?

Key Generation and Certificate Signing Request
Introduction to OAuth
How to create a REST policy in Forum Sentry
How to generate a key pair on Mac OS X
Forum Systems Teams with Trustis to Deliver API Security Solutions on the G...